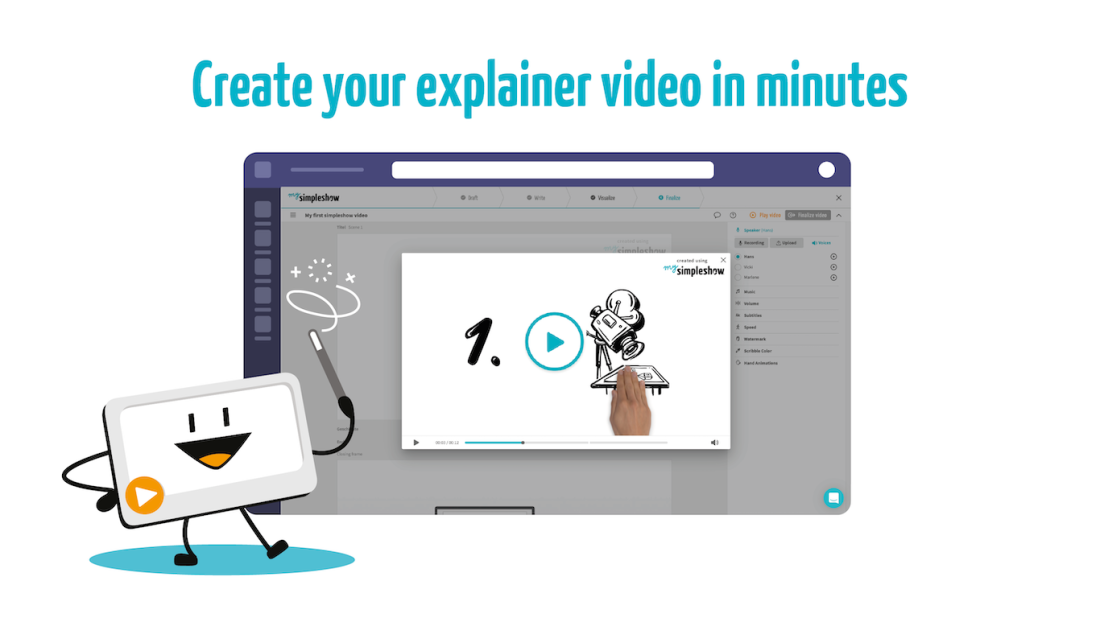 What IT managers around the world have been dealing with for many years and has turned out to be a tough process for numerous companies has been massively accelerated by a diminutive virus in a very short time: The digitalisation of global corporations. Platforms for digital collaboration are on the rise, which in turn gives SaaS solution providers the opportunity to adjust their products. The Berlin-based tech company simpleshow has also responded to this trend and now offers its simpleshow video maker in the Microsoft Teams environment.

A crisis brings about new opportunities. This is particularly true for 2020 – Corona has shaped this year more than any other event. When a large proportion of people working in offices had to relocate their working spaces within their own four walls, the eyes of the providers of digital tools for collaboration lit up. Despite the warnings of data protection advocates, Zoom, for example, recorded a 355 percent increase in sales in the second quarter of 2020. The American company’s quarterly profit rose to 186 million US dollars – 181.5 million more than in the previous year. Do you find that impressive? It goes even further:

Microsoft also announced impressive numbers regarding its collaboration platform Microsoft Teams, which was released in 2017: The Redmond software giant reported an increase in user numbers from 20 million to a massive 115 million daily users!

Following the market logic, many enterprises also wanted to contribute to creating or establishing solutions that would make working from home easier. That can sometimes bear amazing fruits.

In April, for example, the food box supplier HelloFresh reported an increase in sales of around 265 million euros. The company thus achieved a market capitalisation of a whopping 5 billion euros. This meant that it was worth around one billion more than the long-standing, German proven quality powerhouse Lufthansa.

The tech industry benefits in particular

Smaller tech companies were able to use the months marked by Corona for a positive course of development. For example, the remote servicing and video conferencing software TeamViewer increased its purchases during the Corona crisis – by a full 60 percent. The cloud-based platform simpleshow, which offers digital products and services revolving around the medium of explainer videos, also experienced an increase in user numbers. The company wants to use this momentum to support home office workers in their use of media as a form of digital communication. And it is relying on the support of one of the biggest players.

Anyone who has ever faced the challenge of having to convey complex information in an easily understandable and appealing way has certainly come across the name simpleshow.

Hatched up in 2008 as a small three-person start-up in Stuttgart, the company name has long since established itself as a synonym for simple and short explainer videos. For the past few years, the explainer expert has been transforming into a tech company. The core of its offer is the online tool “simpleshow video maker”. Users can independently create professional-looking explainer videos in simpleshow style.

A big part of simpleshow’s revenue comes from large corporations, according to the company’s own data. Handelsblatt recently reported similar figures regarding Microsoft Team’s usage. Large enterprises rely on the digital collaboration software offered by Microsoft. No wonder, since Microsoft Teams as part of the Office365 package is essential to many companies.

Considering this overlap of users, it is only logical that Microsoft would include the simpleshow video maker app in its Microsoft App Source. The US giant thus enables its users to easily create animated explainer videos while using Microsoft Teams.

Microsoft Teams has offered some apps for video creation in the past. So what makes the simpleshow video maker so interesting? The answer: artificial intelligence.

The only thing that users have to do is write the explainer video script using predefined templates. And then the magic happens: a combination of different AI technologies captures human speech. The AI automatically recognizes the keywords in a sentence and ranks them according to relevance. This would have been unthinkable just a few years ago.

The simpleshow video maker surprises with a wide range of functions

The explainer engine of mysimpleshow video maker recommends you which keywords you should visualise so that your message is clearly communicated. To complete this step, the explainer engine accesses several comprehensive knowledge databases at the same time and an integrated machine learning function. The outcome: A well-adjusted visualisation of the user text, arranged according to context. And all this in a matter of seconds and at the push of a button.

The fact that the sound, editing, and animation of the self-produced explainer video is also handled by the simpleshow video maker quickly fades into the background in the face of the impressively coherent visualisations.

The creation of videos takes between 10 and 45 minutes, depending on the size of the script. Fortunately, the SaaS solution has eliminated irritating interfaces urging the user to edit the video themselves. At this point, all (future) Microsoft Team users would be concerned with one question in particular:

How do I get access to simpleshow video maker in Microsoft Teams?

Simply by searching under “Apps” – in the web environment as well as in the desktop app. You can simply use your Microsoft account and log in to the video maker app via single-sign-on. Our user guide provides you with further insights.

The video maker app also allows you to work on your videos with your colleagues and to update and share these simply. The app is available in German as well as in English but you can always choose a different language for every new project. The AI uses this as the basis for keyword selection and suggestions of illustrations from the video maker’s large database.

The possibilities for joint video creation are really promising

Many of the simpleshow video maker users already use Microsoft Teams. In this respect, the integration of the app into the Microsoft environment should make the work of the majority of simpleshow’s existing customers much easier.

The app is also recommendable for curious prospects and future users. The video maker promises a fantastic alternative to boring slideshow presentations – videos created with little effort. If the change to storytelling-based corporate communications, shaped by pioneer Jeff Bezos, continues, simpleshow and its online tool will probably enjoy many more successful years.