Once, my boss asked me whether I would fly to the Middle-East to replace the trainers at a school. The locals were incredibly friendly and welcoming. Yet, over there women have to be completely covered in black robes as part of their religious practice. If this wasn’t a heavy dose of culture shock already, I felt my hypothetical jaw drop to the ground when a teacher walked 5 meters ahead, yelling “Men are coming!” This was so that the girls would hide themselves and “not be seen” by us. It became apparent that it was a very masculine dominated society, as compared to what we had been molded to view as ‘normal’ our entire lives. The last two trainers had been young, Chinese girls. It was no surprise that this did not sit well with the older men being trained.

The lesson I took away? – It’s important to understand who your audience is, and culture plays a big part in this.

It’s the way we’ve always done it
It all boils down to understanding your audience. Unfortunately, they have not been exempted from the creatures-of-habit rule. No doubt, they will be used to doing things a certain way and will need good reason to consider changing. For example, let’s take a farmer, who, like his father before him, has been spraying pesticides on crops, without protective gloves, his entire life. Why after all this time would he consider wearing protective gloves, just because you say so? He might feel that the neighboring farmers will give him odd looks… be wary of the new technologies or procedures … not see the need to change when all appears fine in the present… The list goes on, while you exclaim: ‘I know why! For his own safety!’

However, if you spent time with him you would understand that family is a big priority in his life. If his kids painted on the gloves and gave it to him as a gift he would be much more likely to use them. They would remind him of his kids, and that he has to stay healthy because he is the sole-bread winner. By making this connection he might realize that he actually does need to make a change. 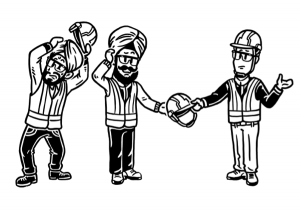 Religious differences
Religion can be a big factor, especially if the traditions clash with safety procedures. Turban wearing Sikhs might not agree to wear a safety helmet at the construction site, and regulations might legally exempt them from doing so, in certain cases. As an employer it’s important to be sensitive to such issues when communicating the ins-and-outs of safety gear. A possibility is to assign them to zones where the risks of falling objects are lower.

Higher tolerance for danger
When one thinks of a safety clip, common sense dictates that people would be motivated to “not get hurt”. But believe it or not, some cultures are simply exposed to more dangers than others. Their motorbike ride home involves weaving in and out of traffic like a chase scene straight out of a Bruce Willis action film, reducing us to a wobbling pot of jello! To them, things that we might consider dangerous might seem “unnecessarily cautious”. Hence, some safety procedures may go ignored to save time and get work done faster.

Reserved cultures
Some cultures are more reserved where people tend to keep their opinions to themselves. They don’t like to report problems as it might be seen as a mistake on their part, or “making trouble” for their colleague. However, speaking up is a crucial part of preventing accidents before they happen. In such communications, it’s important to stress that they are ‘looking out for each other’ by reporting, rather than being blamed for any mistakes.

Simply said, even if someone understands the safety rules they won’t follow them unless they believe in them.
The fish won’t bite if you are using the wrong bait.

At simpleshow we understand the importance of not only presenting the information in a simple manner, but more importantly, to make your audience care about the message. It’s by no means an easy task, but the result of lowering accident rates will be well worth it. And that’s something all cultures can agree on.